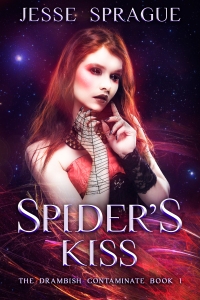 Exciting news! My book Spider’s Kiss, the first book in the Drambish Contaminate series will be available for purchase on Amazon as of December 13th 2019 in both e-book and print format.

This book has been years in the making and I’m so happy that it is finally on it’s way to the world:

Silvia is a spider queen without a throne. Having escaped the destruction of her race of shape shifter spiders, Silvia has lived her life enslaved in the bowels of the galaxy’s most infamous brothel. Her confinement keeps humanity safe from her powerful kiss, which bring death, insanity, or worse: contamination by the Drambish gene, converting the victim to one of her spider brethren.

Deadset on obtaining freedom and rebuilding her race, Silvia focuses in on the one man who stands between her and her goals.

Police Chief Berrick Trehar, a man whose absolute belief in the law was cemented by his wife’s death, knows that opposing the spiders is the right choice. But when Silvia ensnares the widower’s only daughter, the threat to his child complicates his choice. Defeating the spiders may be his only way to protect both is daughter and the universe from the spider’s kiss.

Survival is the goal, but not everyone can triumph in this game of mortality, madness, and lust.